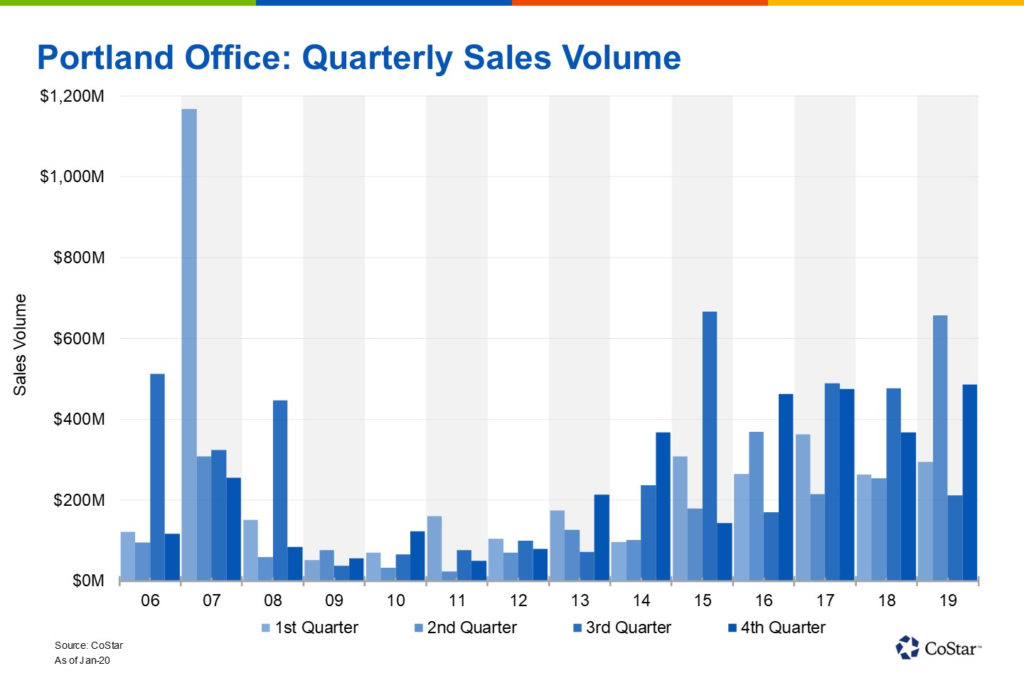 Portland’s dynamic economy, accompanied by structurally low office vacancy rates below 8% for more than four years and a cumulative rent growth increase of 34% in the past decade,
continues to heighten its profile as an investment market. This past year’s sales activity will certainly help build that profile.

In 2019, Portland, Oregon, recorded $1.65 billion in office sales volume, the most money invested into its office market of any year since the Great Recession. By way of contrast, office investment in 2018 was $1.36 billion. And in comparison to 2018, market capitalization rates compressed by 10 basis points to 6.1%, and market pricing increased by 6.7%.

Office properties in Portland sell at lower prices than comparable properties in other large West Coast markets such as San Diego o, L os Angeles and nearby Seattle, making Portland an appealing choice for investors.

Sales volume is consistently concentrated in the downtown core, representing about one-third of Portland’s total office investment for 2019. Of the year’s top 10 buyers of Portland
office properties, Gerding Edlen was the only local firm to make the list due to its acquisition of the Power + Light Building.

The October sale of 250 Taylor, which sold for $141.3 million, or $740 per square foot, was another large trade in downtown. With its doors anticipated to open in March 2020, the under-construction, build-to-suit property is set to be the new headquarters of NW Natural, which is set to occupy all of the building’s office space. Prospect Ridge Advisors acquired the office from sellers Onder Development C o, Rockwood Capital LLC, and Arthur Mutal Investments LLC.